Aiming.pro Core Skills is the place to go to train your fundamental aim mechanics and build the skills to get a great Global Aim Rank. 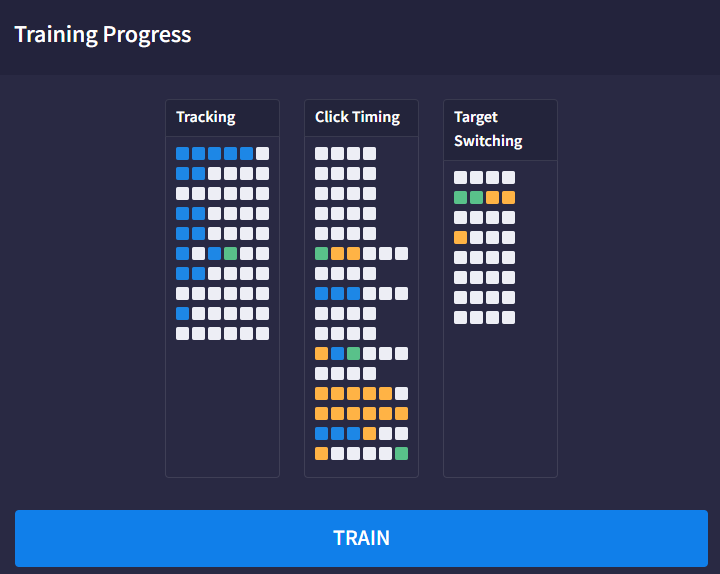 The community loves new drills and they love a challenge. There have been many requests for us to renovate this area and Jason has been raring to go. 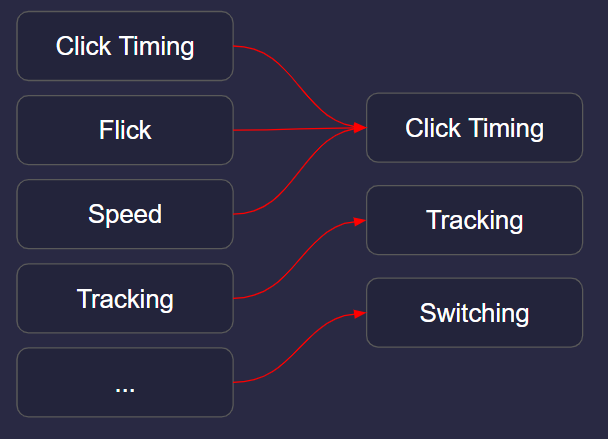 An obvious omission originally was Target Switching. At the time our thought process was Target Switching was a combo of Flick & Track, so we felt like the fundamental skills were taken care of. Not true at all! Target Switching is definitely it’s own skill area. Clean switches followed by immediate directional change to track target movement is no easy feat and it’s significantly different to Tracking. Besides that Target Switching drills are really fun.

Say what? Yep, it’s gone. There has been chat for a while in the aiming community that there is no such thing as flick aim. Traditionally what has been called a Flickshot is just a very fast movement. Crucially though, to do this consistently it’s the same skill and movement as a slow and controlled shot. Therefore we have consolidated the old ‘Flick’ into Click Timing, which we see as any single click aiming exercise.

We will be updating the site over time to recategorise ‘Flick’ drills into an upgraded category.

Speed is also gone. Similar thought process - it’s not an aiming skill. It’s just fast execution. In any drill you can achieve a better score by speeding up (whilst not having your accuracy deteriorate too much).

Having defined the primary categories the next step was to break these down into core aiming skills. We didn’t just want to split each into something like Accuracy and Speed. It’s too basic and doesn’t work. We wanted to encapsulate the fundamental behavioural differences of different types of aim.

It’s likely we’ll be revising these over time as we learn more and get more community feedback but we’re happy with these for now.

Coordination - In general these are 1 or 2 target drills where you can focus primarily on performing a well coordinated movement from one target to another. There can be a reaction time element where you must process a new spawning position and get moving towards it

Balance - These involve decision making and route planning, so you’ll see 3-6 targets often. You still need to use the coordinated movements developed in the previous category, but there’s some extra brain power needed for planning which may divert your attention. You’ll need to maintain balance and control as you’re moving between multiple targets

Agility - These have a great many targets and the focus is on consistently achieving high speeds whilst maintaining mouse control. The only planning is deciding upon a nearby target and then performing a short coordinated movement.

Smoothness - Targets move in a smooth and predictable fashion. The focus is on performing long smooth movements to follow the predictable path.

Reactivity - Targets are frequently and randomly changing directions. This requires you to be ready to change direction and re-acquire the target as fast as possible.

Stability - Targets are static or moving very slowly and predictably. This will allow you to build the basic skills of switching target

Evasive - Targets behave….evasively. You’ll need the basic skills from the Stability category and extend these to perform much more difficult switches and tracking bursts.

Each training exercise is a playlist, usually of 4-6 drills. Each drill gets incrementally more difficult via changing a single variable. Aiming.pro allows many variables of a drillto be changed - some likely ones are:

It became apparent that decreasing target size is a universal way of increasing difficulty in a controlled fashion whilst keeping the gameplay focused on the same aspect. An opposite case is increasing distance between targets. There’s no doubt a great distance makes it more difficult but there comes a point where the movement is so large it requires a different physical technique to make it happen.

Therefore a large proportion of the Core Skills exercises will be using decreasing target size as a mechanic for increasing difficulty. I’d love to have more variety here, but we didn’t want to sacrifice a central drill function for the sake of variety.

These score requirements are super high!

We have made the highest level (blue square) of the hardest variation really hard to get. Like really really hard. Maybe too hard? We will see.

We want the early levels to be accessible but we don’t want the majority of people getting blue on their first attempts. These are drills you need to grind.

Getting blue on any highest level drill is a superb achievement. I will be flabbergasted if someone can get blue on all of them. But that is the challenge!

We’ve done the category changes and uploaded a bunch of new drills. But there is still a lot more to do. We will:

Let us know what you think!