This has probably been our busiest month ever for new features, tweaks and improvements including our new Core Skills area and brand new Skill Assessment Playlists.

We're really pleased to launch the Core Skills Builder, a greatly improved version of the skill builder which we've had on the site since day 1. The concept is the same as the skill builder - a structured set of games focusing on core aiming skills and mechanics. Over the years the site has been live we've learned a lot about aim training and that's let us make these improvements. 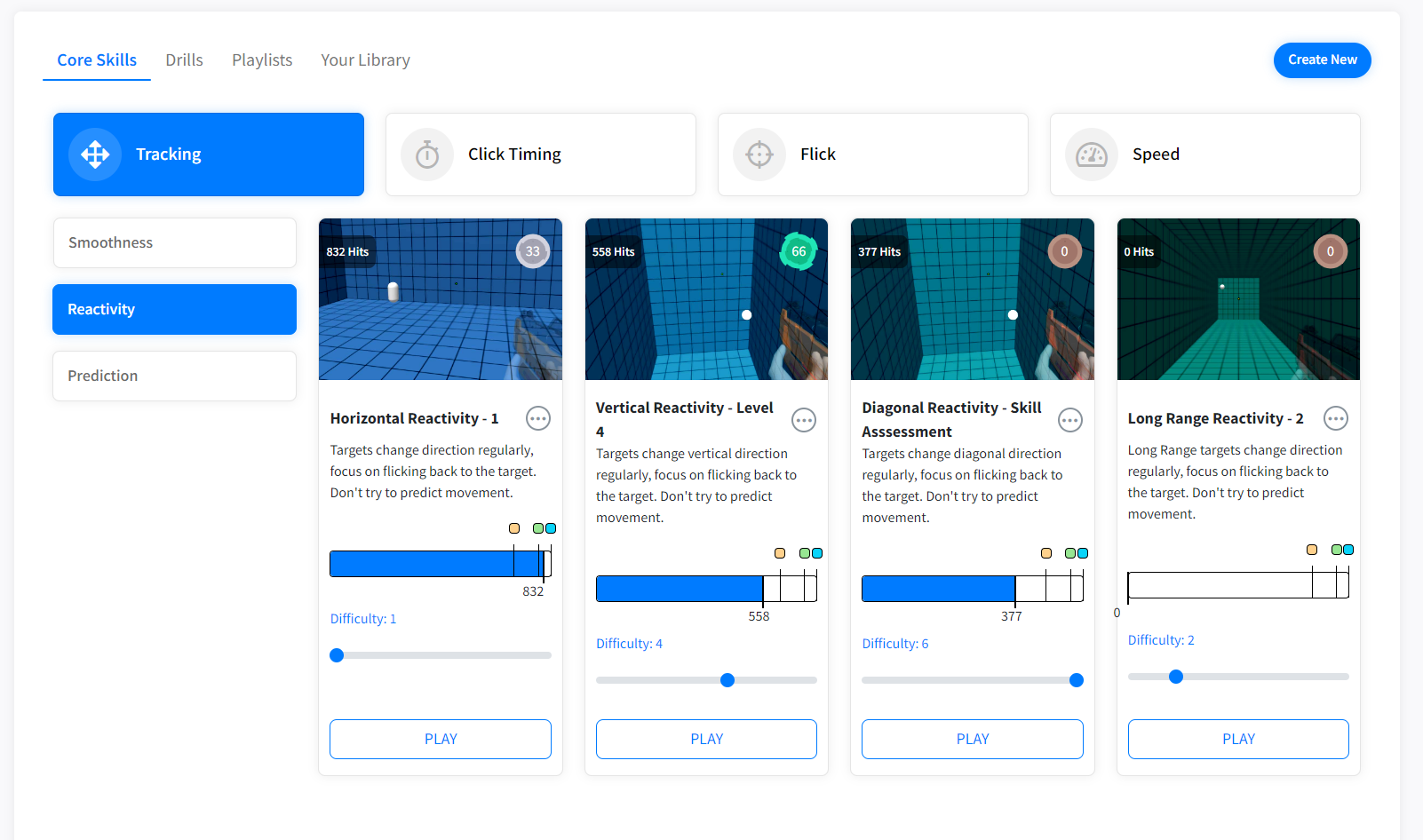 One of the challenges of doing this is finding the right level of difficulty to ensure maximum skill development. What's easy for some is downright impossible for others, so we addressed by adding 6 levels of difficulty for many of the drills. We've set 3 targets for each of them such that if you can't reach level one then it is probably too hard for you. Level 2 should be an optimum level of difficulty to maximise training efficiency and if you can consistently get level 3 then it is too easy and you should move up a difficulty.

We have refreshed all of our skill badges and added new ones for the new skill levels:

In our last update we had just launched the new assessment games. Shortly after that we launched the assessment playlists. These are aligned with the assessment games, but further breaking down the aiming skill into individual parts. For example the tracking assessment involves 3d movement at high speed with lots of turns. In the tracking playlist there are games with only horizontal target movement and only vertical target movement to test those specific skills. We’ve tried to make these games hard, it’s especially apparent in tracking and flick. Use the core skills builder to build up to these more challenging games.

Playlist Leaderboards - As a first step in the assessment playlist competitiveness we’ve introduced playlist leaderboards.These are based on your average percentile across all games in the playlist.

Your position - We’ve changed the backend for our leaderboards to use REDIS. This has enabled us to show your position and those near you, not just the top 10.

Link to game results - Daily, Weekly, Monthly leaderboards now link to postgame so you can check out the game results for those top performing players

Up above we’ve discussed some of the more noticeable new features on the site. But there have been loads of other new features and improvements as well. Read on!

Massive server speed improvements - We analysed the site performance and found a few key bottlenecks. We fixed these and the site is now working very smoothly.

Side Navigation Bar - We’ve grouped the options and added some styling - check it out: 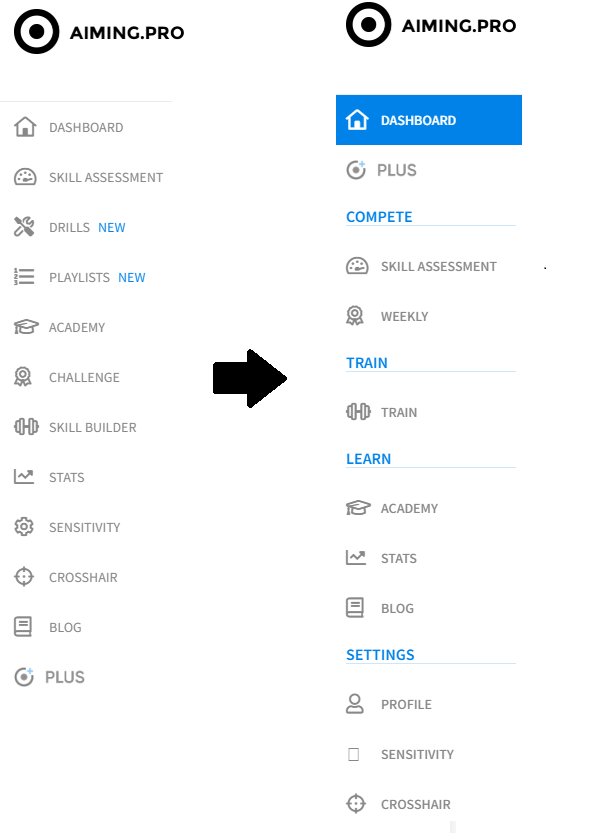 Style improvements across the site - Christian / Celagos loves CSS and he’s been working hard to untangle the style sheet mess we created. There have been a bunch of noticeable improvements so far - much more is yet to come!

We’re continually adding bits and bobs and tweaking things on the game side. Here’s a run down of what we’ve done since last update

We know everyone is different and loves to customise as much as possible to suit their personal needs. So we're continuing to add in more and more options to enable this. 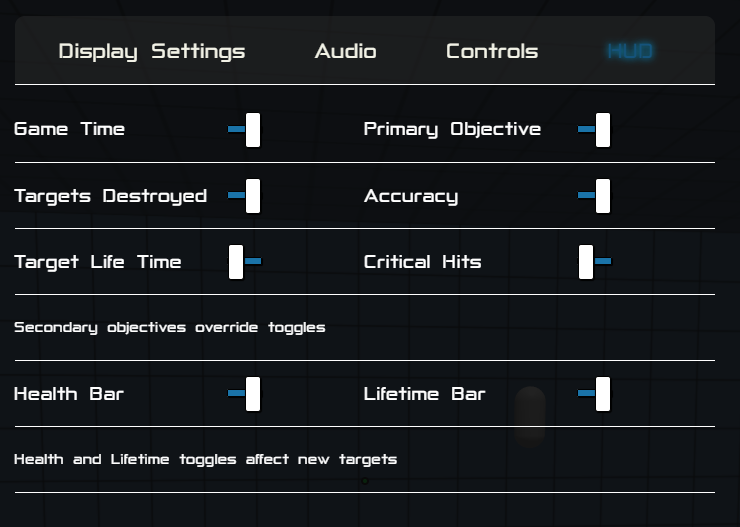 Target Colour - Set the colour of the 3d targets. In the near future we’ll be building out a few more options in this area.

We know Plus members love to create games to meet their training needs or just to create fun games. The community loves to play them. We’re trying to give as many options as possible so game makers can design their perfect aim training game.

Lock targets to ground - This will make targets appear on the ground and stay on the ground if they move. Perfect for short fast strafes style scenarios

Player locked to ground - Player will start at ground level.

Dynamic Difficulty - These cool new settings allow creation of games where target speed, size or lifetime vary over the course of the game. You can choose the increments (positive or negative) and whether they increment on hits, on miss (decrement) or simply per second.

Grow Mode - Targets will start small, grow to their maximum size over half of their lifetime and then shrink back to nothing in the last half.

180 Spawning - Targets will spawn at your sides as well as in front to give a much greater range of motion.

Most of those options can be found in the ‘advanced’ settings area.

The community continues to grow and continues to have lively discussion on all manner of topics. Thankfully the community is so great, it gives the admins and moderators time to work on other tasks.

Bot for Roles - Thanks to XODUS we now have a bot for assigning roles in Discord based on your skill group on the site. Head over to #roles channel for more info.

With the help of the team we’ll continue to expand our Discord functionality. Join us there: Discord server

That’s everything for this update. As always we’ll be continually making improvements to the site, so expect more changes to come!

And join us on Discord