We've rolled out some stats & analysis improvements which we hope will give you greater insight into your aiming performance. We feel like we're getting towards our original vision of offering some truly insightful and unique data to help players all around the world improve their aim.

The old stats page wasn't particularly useful and needed some attention. This new version shows some new and interesting data summaries and removes some areas which were not so useful. Here's the current state:

We've added a bunch of new metrics in the backend based on frame by frame mouse movement analysis. This is 'next-level' performance analysis, giving much greater insight than we (and other aim trainers) previously had. The two metrics now available based on this new data are:

More to come in this area in the near future.

Several months ago we released our 'Skill Groups' based on your performance in the skill assessments. This wasn't just for the sake of a badge, our ulterior motive was to enable player performance vs skill group performance. And this is exactly what we've released here. We hope this will provide really specific and clear data about where you can improve.

Each metric on the post game analysis summary includes this new chart. In the example above there are three main insights: 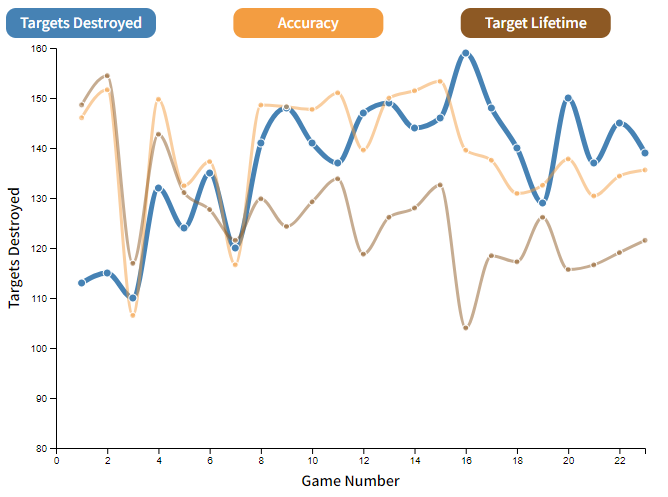 Metric Trends: In addition to the new chart above, players can now see a performance trend for each metric shown on post game by clicking the chart icon.

Octant Accuracy: As previously mentioned the data behind this chart has been improved, so we took the time to try to improve the design of the chart as well, and here we are:

This shows your game performance and how you've performance vs the population average for that specific game - the colouring of the segment is based on this as well. And just to be clear, the top segment shows accuracy where you've moved the crosshair upwards.

Shot Scatter: An octant selector has been added to enable filtering by target octant. This will let you take a look at how your shots are clustered while aiming in specific directions - see below for an example where left/up octants only are selected and there may be some overshooting tendencies. 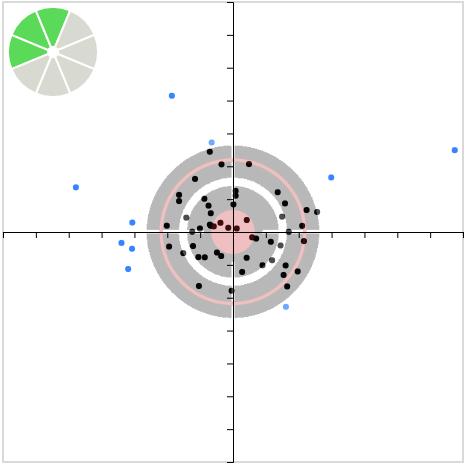 We believe this update has added some really powerful data to the postgame and stats page and we hope you think the same. We feel like we've got the basics of the site in good shape it allows us to work on features like these which takes aiming performance analysis to the next level and really adds a lot of value for our players. We'll continue to work on more advanced features and analysis.

We’d love your feedback on these so please let us know in the Discord channel, Reddit, Twitter or Discord.